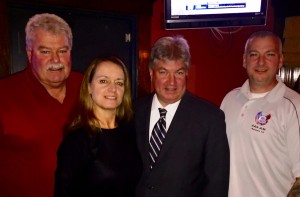 Tonight, members of Local 589 attended a fundraiser for Democratic Rep. Michael Brady who is one of the candidates looking to succeed the late Sen. Tom Kennedy.

Apart from being a former Teamsters truck driver and long supporter of unions, Mike was the only representative out of 154 to oppose the three-year repeal of the Taxpayer Protection Act (or Pacheco Law).

Asked shortly after the vote why he did it, Mike said in an interview that he was “against taking rights away from workers” and a “big supporter of collective bargaining rights.” He said a union enabled him to purchase a home, something his parents were never able to do. Brady also commented on the scam that Baker is pushing in saying, “once you give something away you never get it back.”