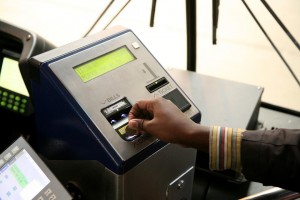 Malden — Transit officials plan to consider changes to the price differential between a bus ride and a subway ride, limit cash transactions and potentially offer certain fares that correspond to a traveler’s ability to pay, according to MBTA Chief Financial Officer Jonathan Davis.

Over the next six months, MBTA officials will analyze a potential 5 percent fare increase for next July, and after that the agency will look at a “broader change in fare policy,” Davis told the Massachusetts Transportation Board last week.

“These are items that will be looked at after the fare increase,” Davis said.

In future years, the T will consider limiting the amount of cash that can be uploaded onto a Charlie Card at a bus fare box, Davis said. If riders don’t have enough money on their card, they can currently add value before getting on the bus, a process that can slow down boarding. The plastic Charlie Cards, which can be loaded up with dollars or monthly passes, give riders a 50-cent per-trip discount off what they would pay with just cash.

A bus commuter himself, Davis said the T would also look at changes to the bus-versus-train fare differential. The Charlie Card fare for subways and trolleys is $2, which is 50 cents more than a bus fare.

MBTA General Manager Beverly Scott has declared herself a proponent of buses in general.

“I like all the modes. I like busing though,” Scott said in an interview soon after her arrival, about a year ago. “I really do love bus a lot because I call it the Rodney Dangerfield of transit, you know ‘don’t get no respect’ but carry so many passenger trips.”

Davis said the MBTA will also look to reduce the number of cash transactions at the MBTA’s parking lots, and would “review our parking rate structure” and consider “setting tiered parking rates.”

Starting in January, the MBTA will provide Charlie Cards that grant free trips to all the people who qualify as “conditional” users of The Ride, the door-to-door service for individuals with disabilities, Davis said. Conditional users qualify for certain Ride trips, as opposed to unconditional users who cannot use the system of buses and subways.

The Transportation Board last week voted to reduce The Ride fare from $4 to $3.

Penelope Ann Shaw, a 70-year-old who lives at a Braintree nursing home, said The Ride was transformative after nine and a half years spent in health facilities, though the cost is substantial for some users.
“I have nine dollars and eighty cents per week to live on. One Ride trip round-trip is $8, wipes out my entire week’s spending,” Shaw told the board before the vote.

Shaw said the Ride allows her to do a range of activities, which might otherwise be unattainable.

“I can go to a service, speak the eulogy at someone’s funeral who’s important to me, or I can go to the supermarket,” said Shaw, describing activities that people without transportation hindrances might find easily achievable.

Davis said the fares next year would not be raised for The Ride customers. The MBTA was limited to 5 percent fare increases every two years in July’s tax package, which funneled motor vehicle sales tax receipts to transportation and increased the gas tax by 3 cents a gallon, linking future increases to inflation.

“Some modes may have increases in excess of 5 percent to account for the reduction in the Ride fare,” Davis said.

“We’ll take a look at means-testing alternatives,” Davis said. He said, “The MBTA would not be the certifying entity.”