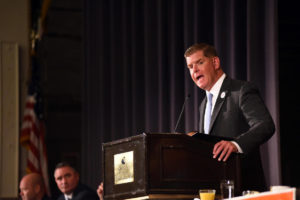 Mayor Martin J. Walsh yesterday came out swinging against the MBTA for weighing the privatization of core functions such as bus routes and maintenance, calling it a “mistake” that could pave the way to widespread outsourcing at the cash-strapped agency.

“It’s a slippery slope. It’s a dangerous way to go,” Walsh told reporters after speaking to a pro-labor crowd at the Greater Boston Labor Council’s annual Labor Day breakfast. “When you talk about privatization, in an initial contract, it always seems like it’s going to save money. Long-term it doesn’t save money, the costs go up. I’ve had some conversations with the governor about this.

“I think it’s a mistake,” Walsh later added. “Privatizing the whole MBTA is not the way to go.”

Steve Tolman, president of the Massachusetts AFL-CIO, echoed the message, telling the crowd that “investment, not privatization, is the way to a better public transit system.”