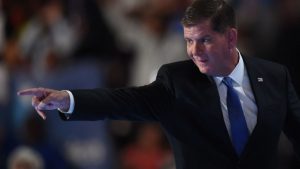 As part of the push to fix the MBTA’s financial outlook, the state transit agency’s management has pushed to outsource certain union jobs to the private sector.

But Walsh, whose connections to labor were vital to his election, said that privatization won’t fix the T.

Established by Gov. Charlie Baker, the T’s control board has seemed interested in cutting costs by privatizing functions like the “money room,” which is tasked with counting the fares collected at gates.