Lynch and Collins Endorsed by Local 589 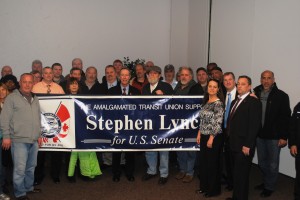 Lynch and Collins came to yesterday’s regular meeting of the membership where they talked with members and asked for their support. Both are special elections. The U.S. Senate seat opened up with Sen. John Kerry becoming the head of the U.S. State Department. The seat that Collins is vying for opened up with the retirement of Sen. Jack Hart.