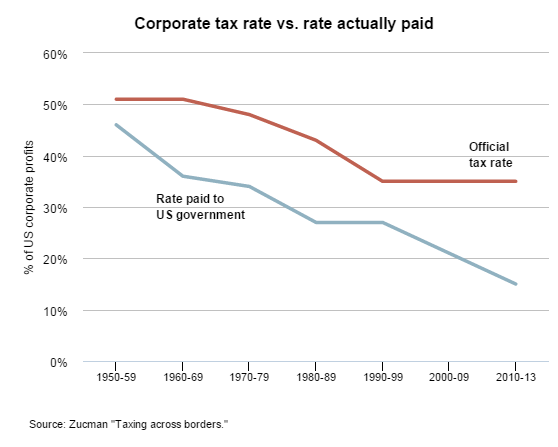 How to earn profits and avoid taxes

When US companies earn profits abroad, they don’t have to pay taxes straightaway. They can hold on to that money, tax free, so long as they don’t use it for their US operations.

This little loophole in US tax law gives companies a strong incentive to book their profits overseas — or, at least, to make it look that way.

Apple is one of the companies that has pursued this strategy most aggressively. It now has $181 billion in overseas profits, most of it untaxed. Close behind, General Electric has about $120 billion, and Microsoft $108 billion. In fact, nearly three of every four companies in the Fortune 500 have set up subsidiaries in tax havens around the world, according to a recent report from two left-leaning research organization, Citizens for Tax Justice and the US Public Interest Research Group Education Fund.

While this brand of tax avoidance isn’t illegal, it is an expensive drain on US coffers, amounting to roughly $100 billion in lost tax revenue ever year, about as much as the federal government spends on highways and infrastructure.

Even if the US closed this loophole, there would still be a deep-seated problem. Tax laws are set up and enforced by individual countries; today’s multinational corporations have the opportunity to pick and choose where they want to host their operations, and whose rules they want to follow.

How common is corporate tax avoidance?

Among large companies, tax avoidance is quite common. Some 350 of the 500 largest US companies had subsidiaries in global tax havens as of 2014, in places like Ireland, Bermuda, and the Cayman Islands.

What is more, the scale of tax avoidance has been growing. Today, about 17 percent of all the profits made by US corporations are reported as coming from tax havens. In 1984, it was just 2 percent. 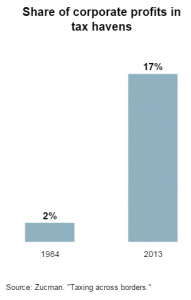 Funneling all of this money through tax havens creates some pretty absurd economic distortions. In 2008, the total profit American companies said they made in Bermuda was 10 times as large as the entire Bermudian economy.

How much money are companies shielding from taxes?

Precise estimates are tricky, because tax avoidance schemes aren’t known for their transparency. But UC-Berkeley economist Gabriel Zucman estimates that corporate tax avoidance costs the US about $130 billion each year. Some of that is federal money, and some would go to the states.

More generally, tax shelters are a big reason US companies have been paying an ever-shrinking tax bill. Although the corporate tax rate is currently 35 percent, corporations actually pay more like 15 percent to 20 percent. And that number has been declining steadily over time. 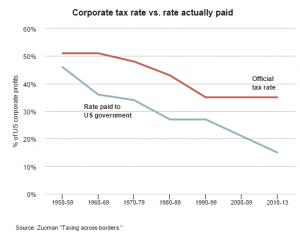 Massachusetts misses out on about $600 million each year as a result of these strategies. That’s substantial, enough for a massively expanded early-education program, for instance.

Here are some of the Massachusetts-based companies that are putting off tax bills by keeping money overseas. 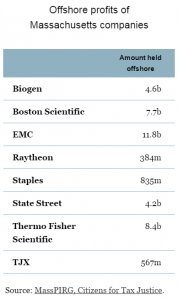 Won’t the companies have to pay their taxes eventually?

overseas earnings in global operations, while putting off their US tax bill until they need those funds back home.

Trouble is, companies can play the waiting game, holding their money abroad until they get some special incentive to bring it back. In 2004, for instance, Congress introduced a tax holiday, letting corporations reintegrate their overseas money at a reduced tax rate.

Companies rushed to take advantage of the deal, but once it was over, they quickly startedstockpiling money again, in anticipation of the next tax holiday.

In the interim, companies have found ways to keep their money overseas and use it at the same time. If need be, overseas profits can serve as collateral for a loan, which can then be invested in their US operations.

Can tax avoidance be curtailed?

Multinational corporations have one big advantage over the IRS and other tax agencies: They can move — or threaten to move — in search of lower tax rates and weaker rules.

As yet, there’s no coordinated, international system to help countries push back against this gamesmanship. The The Organization for Economic Co-operation and Development – which brings together leading economies from around the world – has been working toward a more integrated approach, including better reporting on where companies are really doing business, but ending tax avoidance may take more than that.

One challenge is that the basic principles of international tax law are nearly 100 years old, and not well-tailored to the modern economy. As an example, they are built around the idea that addresses matter, and that taxes should depend on where companies are set up — which is why companies can benefit simply by opening a post office box in the Cayman Islands.

Instead of worrying so much about where companies are headquartered, it might make more sense to tax them based on where they actually make their sales, or hire their employees.

Here in the US, there may be room for a kind of grand bargain. Something like the following: Let companies bring their foreign profits back to the US at a greatly-reduced tax rate – maybe even zero; but at the same time, change the tax code so that there is no longer any advantage to keeping profits overseas.

If that happened, businesses would be able to secure all the benefits of their long game of tax avoidance, but the federal government could rely on a more regular stream of future tax revenue.

Evan Horowitz digs through data to find information that illuminates the policy issues facing Massachusetts and the US. He can be reached at evan.horowitz@globe.com. Follow him on Twitter @GlobeHorowitz