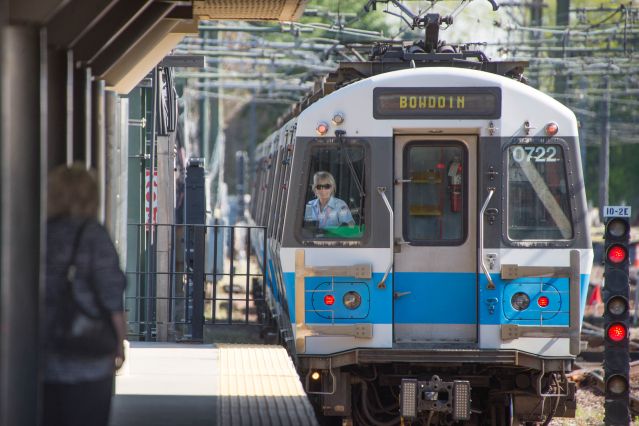 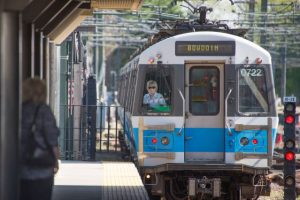 For the Blue Line’s Helen Antenucci, every morning is a good morning. Derek Kouyoumjian/MetroPhoto

Take a look around any MBTA train on a given day at rush hour, and it’s basically just a crowd of groggy commuters staring at their phones (or flipping through the Metro).

But what if you could start your day not by awkwardly avoiding eye contact for 20 minutes, but with a friendly hello?

That’s where Helen Antenucci comes in. The 74-year-old Blue Line driver, who loves the New England Aquarium and can appreciate a sunny day with the best of them, has spent nearly two decades greeting passengers with a little extra joy on their way to work.

“Good morning and what a wonderful morning it is,” she said through the speakers Monday morning, as the 8:30 a.m. train left Orient Heights. “The sun’s shining. It doesn’t get much better than this!”

An East Boston resident who’s spent most of her life in the neighborhood, Antenucci got her start with the MBTA 21 years ago, and she’s spent her career with the T trying to brighten people’s days.

Some passengers have become friends, others fans.

“They’ve been wonderful,” she said. “I had a young girl get up and tell me her day started awful and her whole day changed just by someone saying ‘good morning.’ I said, ‘You know what? You have a beautiful smile and you could make somebody else’s day.’”

“She goes above and beyond what the customer relations desk wants you to do,” said Jimmy O’Brien, president of the Boston Carmen’s Union. “She puts a lot of pride and effort into what she does.”

It’s not for everybody, though, and she knows it.

Take Kristin Dukes, a Simmons professor on her way to work on Monday, for example. It’s a bit of a love-hate relationship, she said.

“It depends on the mood I’m in. Sometimes she makes me laugh,” Dukes said. “She’s always so happy and sometimes I don’t want her to be happy. I’m just being honest: Do we look like happy people?”

Antenucci doesn’t let the haters get her down. “I don’t internalize that. I just feel that people have a right to feel the way they do and I can’t change that.”

Antenucci doesn’t let the haters get her down. “I don’t internalize that. I just feel that people have a right to feel the way they do and I can’t change that.”
She said she’s heard negative reviews from people on their way out of the train, who made it clear they didn’t want to be bothered – “the ‘F’ word” has been used, she can report.

“I don’t internalize that,” she said. “I just feel that people have a right to feel the way they do and I can’t change that.”

Mostly what she remembers are all the times she’s been stopped out in public by people who recognize her voice. It’s happened more times than she can count, she said.

When she passes through the New England Aquarium, dozens of times a day, she usually informs passengers that it’s “one of my favorite places.”

The aquarium thing is part of her brand, she said, and it’s a quirk people seem to remember.

“I went to a wake once and someone said, ‘You’re the one that loves the Aquarium!’” Antenucci said. “I said, ‘I do but maybe now is not a great time.’”

“For me, each day is a gift. This is who I am all year long. I might be certifiable, I don’t know,” she said, laughing. “You know what? We’re very lucky. If we have to deal with snow, there’s people who deal with a heck of a lot more than we do.”