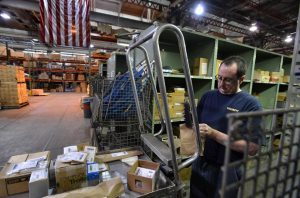 The MBTA’s Fiscal and Management Control Board met again to explore more ways to privatize parts of the MBTA.

President Jimmy O’Brien as well as several members of Local 589 questioned the savings privatization would bring as well as why it was being privatized at all since the problems associated with it lay with T management.

Below are some of the articles written about the meeting as well as some excerpts from those stories that highlight Local 589’s testimony.

Much of the public testimony Monday was dominated by union backers who argued that privatization would not save as much money as intended.

“Cost savings are never a guarantee with privatization,” said state Representative Josh Cutler, a Democrat from Pembroke. “Public transportation is a public good and it should remain so.”

He blamed the T’s system, noting that it runs the central warehouse only 40 hours a week, despite 24-hour maintenance. He also said the system encourages mechanics to take parts even when a stockperson isn’t there to track the inventory — which contributes to the system’s inaccuracies.

“I’m still not sure why employees are facing outsourcing when we all agree it’s a management problem,” said Keller.

Workers represented by the Boston Carmen’s Union argued the warehouse operations had been ignored and underfunded despite concerns raised by its workers.

“We are incredibly understaffed and we have asked for improvements,” said Jeanne Breare, who said both she and her husband work for the stockroom – he in South Boston and she in Quincy. She said, “Management has neglected the stockroom for many, many years. We’ve had no formal training. It’s been mismanaged from the top down.”

John Hoffman, who said he worked 15 years at the Everett stock room and has never showed up late to work, said the personnel in Everett varies from two to 10 people most days, helping repair shops meet the needs of more than 3,000 vehicles, buildings in 150 locations and “hundreds of miles of track.” Given the complexity of the task, Hoffman said, there is “no way that a private company can step into this job tomorrow.”

As the MBTA board and managers explore ways to privatize parts of the transit agency, union workers are telling them that outsourcing jobs isn’t the way to revitalize the T.

“To think that a private company could come in tomorrow, fill in the gaps, turn a profit and save the public money is nonsense,” said James O’Brien, the head of the Boston Carmen’s Union Local 589 union, which represents the warehouse employees.

“It’s wrong for management to target the jobs of dedicated men and women who have worked for years to serve riders as a solution for their decades of neglect,” Carmen’s president James O’Brien said in a statement before the meeting. “We have already seen how privatization of transportation does not deliver improved service for riders, and management has yet to explain how more outsourcing will lead to better service.”

According to the Carmen’s union, the 15 stockroom locations employ 32 workers and handle over 35,000 parts for the aging transit system. The union said in a statement that management refuses to add the staff needed to keep the central Everett warehouse open more than 40 hours a week, even though repair shops work around the clock.

“But management has refused to make the investments necessary so that the stockroom operation fulfills the needs of a 21st Century transit system,” O’Brien is credited with saying in the statement. “It is impossible to believe that a profit-driven private company without the necessary knowledge and expertise can step in tomorrow and meet the needs of the MBTA’s diverse fleet of vehicles, hundreds of miles of tracks, and vast collection of buildings.”